Ongoing Discussion: Use of Establishment Fee

The Maple DAO Treasury has received $220k in Establishment Fees since launch and there has been discussion in the community about deploying it. Various options proposed by community members include the repurchase of MPL or distribution.

Current status of conversation on Discord 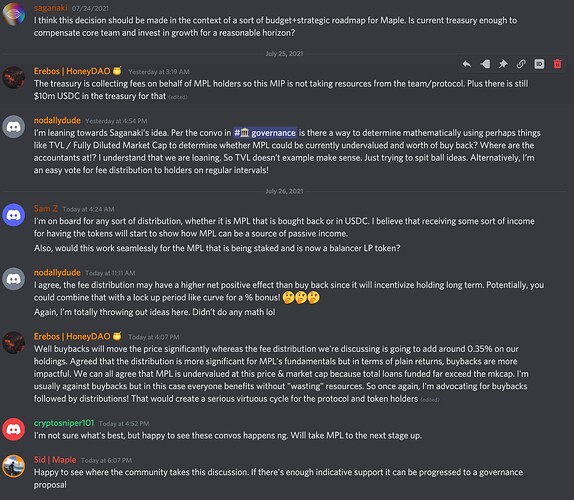 If there is sufficient interest, a formal governance proposal can be submitted in accordance with Governance V1.

That will most likely be the main debate of the community call. I’m curious to know what will be said

Some good discussion taking place. Personally i would prefer the buy back and burn of maple. I think this would be more beneficial to most mpl token holders at this point. Interested to here more options too. Is it possible to put the $220,000 to work to earn even more fees for us early mpl token holders?

@sid.maple What is your preference? If you had to choose 1 option today what do you think would be most beneficial to Maple?

A PRIMER ON CORPORATE FINANCE FOR DAO TREASURIES
It seems a lot of the discussion about the relative merits of a buyback hinges on the proponent’s assessment of how much buy pressure it will induce.

SETTING THE SCENE
DAO Treasuries, like startups and other corporates must decide how best to apply finite resources towards a goal. What should that goal be? Jeff Bezos who might know a thing or two about business set a good one at Amazon, “maximise the free cash flow per share”.

So then, DAOs theoretically in general (not specific advice) COULD apply the same thinking to maximize the free cash flow per token. The expenditure of scarce treasury resources is thus evaluated on the Net Present Value (NPV) of each option.

A DAO following that process would:

WHAT ARE THE OPTIONS FOR MOST ENTITIES?

WHY DON’T STARTUPS DO BUYBACKS OR DIVIDENDS?

Building their product is usually the highest NPV activity for startups. Their equity is also illiquid which typically prevents buybacks. They also don’t pay dividends because they can reinvest the capital in growth at high rate of return.

HOW COULD DAOs THINK ABOUT BUYBACKS?

NOT as a way to influence price.

Instead, a DAO is spending $X and over a 7 year horizon can earn $Y yield per annum from staking the token, and at the end of 7 years could sell the token at a terminal value of $Z (typically a multiple of Rev/Fees/Yield). The NPV of the buyback is the discounted sum of the $Y staking cash flows and the terminal sale price of $Z, minus the initial cost of $X.

Therefore the assumptions that a DAO should weigh and consider are:

If in the mental arithmetic of DAO members, these numbers resulted in a positive NPV and the DAO had the resources to do both continued product development, and the buyback, then such a move would make sense within that mental framework.

This is an interesting idea @Scotty Part of the broader Treasury Management planning has involved suggestion of participating as a Lender and also a Staker in the Maven and Orthogonal pools.

Doing so with the Estab. Fees helps enlarge them on behalf of token holders.

I’m afraid of a scenario where investing in the pools amplifies the downside on MPL value if there is a significant impairment of the pool. There are benefits as well, as it serves as a sign of alignment of interests between MPL Holders and Lenders.

@Erebos suggestion of buybacks would be my preference. It’s been represented that there is adequate runway in treasury, thus these fees give an opportunity to generate upwards price pressure on MPL. I further think there is scope to make this recurrent, which could provide early support of MPL’s cash flow generating potential, with ERC-2222 distributions perhaps in the future as well.

I wanted to see what potential price impact could be, so I checked the price impact of market buying MPL split 50/50 between the two major MPL pools. Note that I do not recommend going about the buyback this way, but it can serve as a high estimate of price impact that could result. 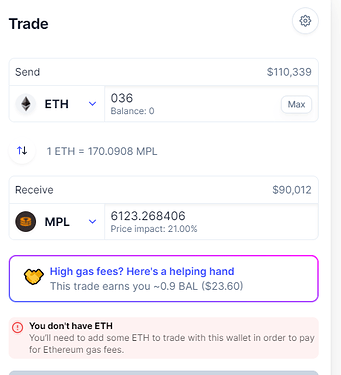 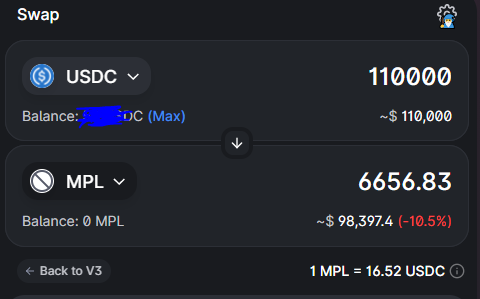 This conversation has stalled a bit so wanted to follow up on it and provide some colour on the various feasibility of the options. @saganaki has done a good job contributing to the discussion.

As at 21 August, treasury has received $390K from establishment fees since May.

Three of the options which have received the most endorsement are: distribution of the fees, buy back of MPL and hold for later, buy back MPL and distribute. Taking each of these there are pros and cons which Mapes can consider:

OPTION 1) DISTRIBUTION
This uses the inbuilt functionality of ERC2222. It equally distributes a designated amount to ALL 10M MPL tokens (including ones held in treasury and vesting contracts). This means each MPL receives $0.039. A drawback of doing this early is that 1) at the lower level of circulating supply, a substantial part of fees end up back with treasury, and 2) gas fee for a wallet calling the function may prove material percentage for smaller holders.

OPTION 2) Buy Back and Hold

Posting this to reinitiate discussion. Welcoming all thoughts from Mapes

Regarding Option 3, after giving it more thought, not sure how feasible this is. For example, if you are LPing in the Balancer Pool, you wouldn’t receive any? That doesn’t seem like a distribution mechanism that provides appropriate incentives for all MPL holders.

Therefore, leaning more towards Option 2 on my end. Would be great to hear what the rest of the community thinks.

PS: Regarding developer time I think there are solutions we could use to distribute the bought-back MPL in kind without encroaching on developer time, for example: https://disperse.app/. Appropriate due diligence would be necessary.

I think there’s a fourth option implicit in your post, @sid.maple, which is just to retain the cash for the meantime. I think your point about fees in distribution is a good one. My preference would be distribution over buybacks for reasons previously expresses on Discord, but my next preference is for buyback, but only if the token price is low (however that is defined). The price has been as low as $5 and as high as $24 in the last 6 months alone, which would be nearly 5 times difference in the number of tokens if bought back. So maybe the best option is just to keep the cash for the moment.