MIP-006 Use of Establishment Fees

As at 30 November, treasury has received over $1m from establishment fees since the launch in May.

Exec Summary
The proposal is to use the fee revenue for repurchasing MPL tokens by the Maple Treasury to further facilitate the growth and scaling of the protocol. Potential use cases for these MPL tokens are hiring, business development, strategic partnerships and protocol rewards, as well as driving further scarcity of MPL.

MPL is trading at a 50% discount to its all time high and has not appreciated in line with TVL growth and broader adoption of the protocol. While the belief is that MPL is trading at a discount currently, the main purpose for this proposal is the value that the treasury and protocol can derive from holding and using MPL in the future.

Strategic Token Swaps and OTC Purchases: we receive inbound interest from a number of other DAOs, Corporate/Layer 1 treasuries, Venture Capitalists and funds interested in pursuing partnerships. The repurchased tokens could be used to support meaningful partnerships that grow TVL and enhance Maple’s brand recognition and composability within the DeFi ecosystem.

Staking: Single-sided MPL Staking is being planned for Q1 2022. This would allow the Treasury to stake the purchased MPL and earn a yield in USDC on it. If the March 2022 origination target of $1B in loans is reached, then assuming an average interest rate of 9%, that would mean $9M (ie 10% of $90M interest) in fees going to the staking reserves across the Maple pools. The treasury would benefit from this yield as well as any price appreciation in the MPL itself. Most protocols do not generate sustainable fee revenue.

Conclusion
Maple has scaled well since its launch in May but we are a long way from reaching our long term goals and achieving our ambitious vision. While distributing the fees to token holders is possible, 70% of this would be lost due to only 30% of MPL being in circulating supply. A distribution also seems short-sighted in light of the opportunities to redeploy the capital for growth via partnerships, hires, or strategic token swaps. We are long term in our vision and hope to attract long term-oriented community members and MPL holders. We think this proposal aligns with that thinking and is far and away the best solution for Maple.

Thanks @sid.maple for this recap.

I agree that a distribution should not be done here (or likely anytime in the near-future until its a much more mature protocol). All of the growth initiatives plus what you mentioned above are going to add a much greater rate of return if reinvested. Plus, the gas it would cost recipients to do something with it would outweigh the amount of the distribution.

How I see buybacks -

The other aspect to think about here in regards to the $1mm - what runway does the current treasury balance provide for the MPL team and growth roadmap. I’m positive you have thought about this but as long as the business is strapped with cash to support the next 6-12 months of expected operating+growth expenditures, the buyback likely makes sense. It would be weird to buyback the token only to have to raise more cash in 6 months time to support the business.

Along these lines, I also would not want to see a buyback done today at say $22 and then in 3, 6 or 12 months time see MPL tokens sold to a strategic investor at a price for less than what they were repurchased by the treasury for.

Given what I currently know, I am generally supportive of the buyback. If there’s any additional clarity on the above points that can be provided, that would also be appreciated.

Thanks again @sid.maple and team! It’s clear you guys are working really hard out there - constantly on the road, doing educational talks, industry panels, communicating with the community and I am sure a ton of meetings and administrative things along the way. I am excited to continue to watch Maple grow!

Nice analysis @Mi_Scusi. Using the same arguments you made, I think we’re better off not doing a buyback at this point. Sometimes the best course of action is not to act.

@DaveinAus well I don’t think it should be quickly dismissed either because at today’s prices, a $1mm buyback is ~0.5% of the total token supply. That is extremely valuable for things like strategic investors, hiring and talent retention that can be utilized very efficiently. Two examples include hiring top tier dev talent who would be paid in cash + MPL. That equity amount can be used to hire many top tier people, of which is vested over a multi year period which basically locks in the comp cost at today’s price but pays it out at a much higher MPL value. The other example is bringing on a strategic investor in the future like an Alameda or BlockTower. Also which functions similarly - gets vested over time and keeps that supply locked up. The benefit in this case is you add this strategic investor’s vast network of new borrowers, liquidity providers, DAO treasuries from other investments (ie Maven/MC example).

In a nut shell, if I myself am a huge buyer of MPL at today’s prices and believe it’s one of the highest potential returning investments I can make across my crypto portfolio, then by definition that would also hold true for the Maple treasury and I’d want them to repurchase since the only other alternative is hold the cash, which has a very low return given it’s not needed today.

OK yeah I missed the bit about paying in MPL. I should know better since I’m doing two start-ups myself.

I agree with reinvesting the establishment fees into the growth of the protocol via the avenues you mentioned above and while I also agree MPL is cheap relative to the fundamentals, however, I think perhaps we could also explore investing in growth without doing MPL buybacks

That was also part of my considerations. What initiatives are you thinking of? The point is that this $1m does not impact any other growth investments given that the protocol has a sizeable USDC position already. Therefore the buyback makes sense.

The voting period of 7 days has passed and the voting hit the required quorum of 20% of registered Mapes (71). Therefore we can consider MIP006 approved by the community.

In terms of execution we can set out clear next steps but early thinking would be that to minimise the impact of slippage. The buyback would be broken into quarters or deciles and executed on DEX. OTC sellers may also submit interest. 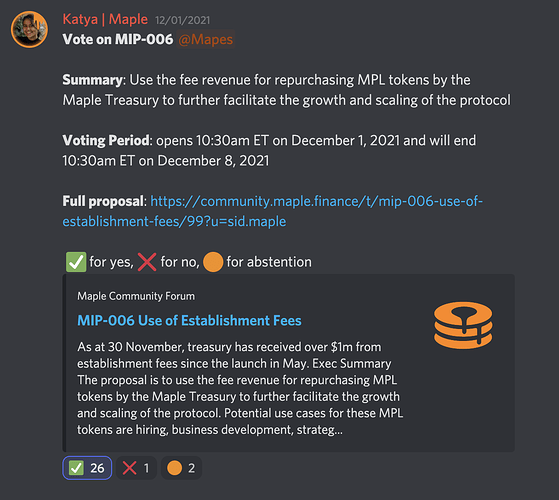 This fulfills the requirement of 20% Mape participation with 41% of registered Mapes voting.

The proposal passes & updates will be shared when implemented!

The MPL Buyback approved by Maple Tokenholders in MIP006 has now been executed by the Treasury. Record of txns is available below.

Revisiting this topic - without making a statement on current valuation, I believe having a larger outstanding buyback program is something that should be considered.